What is Voice Over IP?

What is Voice over IP (VoIP)?  In short, VoIP is a revolutionary phone technology that can probably save your business a considerable amount of money while adding a ton of new productivity features for your business.  A textbook “win-win” in my opinion.  If this piques your interest so far, read on.

To understand Voice over IP, we first need to have a cursory understanding of IP.  IP, or Internet Protocol, is a set of rules and procedures that govern how packets of information are transmitted over a computer network.  This is analogous to traffic laws – as long as all drivers abide by the predefined set of established rules, we can all get to our destination as safely and efficiently as possible.  If computer networks are highways, data packets are cars, and IP is “the law”. Why do we drive on the right side in the US? It’s “the law”. Why do we stop when traffic lights turn red?  It’s… “the law”.  IP is the governing force that ensures connected network devices interoperate and play fair with one another. 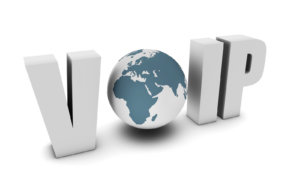 Now on to VoIP.  VoIP is telephony redefined (tuh-LEF-uh-nee, not tel-uh-FOH-nee).  With VoIP, analog voice signals are converted into digitized packets of data and then transmitted over IP-based networks, such as your business’s computer network or even the public Internet.  These packets are now on the same “highway system” as your e-mail traffic, web traffic, or other application traffic. However, when you call another VoIP phone (or simply, IP phone), landline, or a cell phone, those voice packets get converted back into an audible analog signal before reaching the called party’s ear. Just as it was 100 years ago, the signal is analog at both ends of the call path.  But with VoIP, the middle has taken on a new form.  This transformation into IP is what provides so much elegance to VoIP.

The Benefits of VoIP

While traditional business phone networks run in parallel and do not intersect with computer networks, VoIP allows you to converge your voice and data networks into one.  Cost savings are obvious with the management of only one network instead of two. Often times this means less hardware, one less vendor, and less wiring in greenfield opportunities.  Additionally, due to the borderless nature of IP, VoIP provides simplicity to moves, adds, and changes and provides for more flexibility. Multiple business locations can be converged into a single unified phone system allowing for extension dialing to other sites.  Your workforce can be connected while in the office, at home, or on the road, providing unprecedented levels of collaboration.  Costly phone lines can also be consolidated, or in some cases, eliminated altogether depending on the specific VoIP strategies being used.  Standard feature sets of VoIP phone systems also usually include advanced auto attendants, IVR (interactive voice response), conferencing, and single number reach (one number for calling, texting, and faxing).

“Our current phone vendor does VoIP too”

That may be true, but if we are already providing you IT services, there is a good chance we can save you money.  VoIP implementations with 3rd-party phone vendors typically require that IT resources get involved anyway, resulting in unplanned hidden costs and longer times to implement.  Plus, your phone vendor may try and sell you on redundant infrastructure investments (e.g., duplicating your existing network switches), all in the name of guaranteeing a “supported” platform from their end.  A successful VoIP implementation demands a unity between telephony and traditional IT technologies.

VoIP holds many promises for your business, but if not implemented carefully, the results can be disastrous.  For starters, if you are forfeiting the tried and true (and expensive) copper landlines for Internet-based phone trunks, you better hope your ISP is rock-solid.  If it is anything less, a backup connection may be in order.  This still adds another layer of complexity to your network design and typically requires more advanced Internet-edge routers capable of handling multiple uplinks and detecting failures.

Power is yet another consideration.  For those of us who can remember traditional landlines in our homes, have you ever wondered how you were able to make a phone call during a power outage?  In short, the phone company is providing the required power via the phone line itself.  IP phones being essentially small computers with handsets, aren’t connected to the public switched telephone network (PSTN) and require more power anyway.  To combat this, higher-end network switches supporting Power over Ethernet (PoE) can provide both power and data connectivity to the IP phones over the same wire.  To maintain the phone system during a utility power outage, your network equipment should also be protected with an Uninterruptable Power Supply (UPS).  A UPS is an electrical apparatus that provides emergency power to a load when the input power source or mains power fails.  In truth though, you should probably have one of these anyway regardless of whether or not you are considering VoIP.

VoIP traffic is also susceptible to jitter and delay more so than other forms of data.  The ITU-T (International Telecommunication Union, Telecommunication Standardization Sector) recommendation G.114 states that voice traffic should not incur a one-way delay exceeding 150 milliseconds.  Humans don’t perceive a delay with most application traffic (e.g., consecutive web page loads differing more than 150ms), but if a phone call suffers from network congestion, the call participants will start to notice a degradation in quality.  This is why it is so crucial to implement Quality of Service (QoS), which requires yet more advanced network gear and a lot of know-how.  Without going into detail here, QoS is analogous to the “white glove pass” at Disney World.  While other non-delay sensitive traffic is queued and forced to wait in hour-long lines (or millisecond-long lines?), voice traffic should be engineered to receive the preferential treatment that only the upper-middle class can afford and get ushered to the front of the line to prevent any delay, thus ensuring optimum call quality.

Furthermore, bandwidth requirements need to be factored into the VoIP equation.  While single-site VoIP implementations don’t typically have any issues providing the required bandwidth for phone conversations, multi-site businesses with low bandwidth inter-site connectivity (such as site-to-site VPN) may prove challenging.  Where QoS steps in to guarantee bandwidth in congested network conditions, it can’t do anything to increase links that are low-bandwidth in the first place.  In these scenarios, voice compression techniques can be used to mitigate the effects of low bandwidth but this requires detailed prerequisite knowledge of the network topology – something a third-party phone vendor is not likely to be familiar with.  On the flip side, I have personally seen grossly over-engineered multi-site VoIP implementations because the phone vendor was not aware that the sites were connected via extremely high-speed fiber optics.

VoIP is a fantastic phone technology that allows for unprecedented flexibility, collaboration, high-availability, advanced feature sets, and (typically) cost savings.  However, if the cost of entry seems a little too steep with the requirements of more robust networking gear, the truth is you are probably already behind with your business’s technology.  For those businesses who don’t mind investing in themselves, they likely already have the solid infrastructure that allows for a smooth and natural transition to VoIP.  Either way, if your network isn’t ready for VoIP EAS will let you know and help develop a plan to get there.  If you want more information, simply click this link and send us an email and we will get back with you.