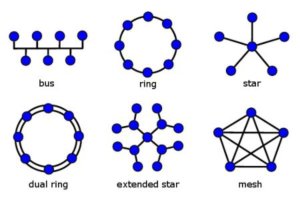 A physical ring topology is not a common implementation because a single break in the ring can effectively prevent further communication with the network’s nodes.  Additionally, any addition or removal of nodes will also temporarily bring the network down.  To overcome the obvious design flaws of a physical ring topology, certain networks such as Fiber Distributed Data Interface (FDDI) use a dual ring topology where data is transmitted both clockwise and counterclockwise.  The redundancy ensures that network functions continue in the event of a single break in a ring.  Token Ring (IEEE 802.5) uses a logical ring topology while using a physical star topology.  A physical star topology is advantageous because a failure of a node does not necessarily disrupt the network.  The exception would be a failed central device such as a Token Ring multistation access unit (MSAU) or an Ethernet hub or switch.  Older implementations of Ethernet (802.3) such as 10Base2 or 10Base5 used a physical bus topology where hosts would be attached to a backbone of coaxial cable.

Even though all Ethernet implementations use a logical bus topology, the trend has moved to using a star or extended star physical topology.  With this arrangement, unshielded twisted pair (UTP) cable is typically used to connect nodes to a central network device such as a hub or switch.  From there, if the topology needs to be “extended”, extra hubs or switches can be connected together to accommodate more devices.  A physical star topology creates a central point of network access and management with the Ethernet switch as well as facilitates in troubleshooting performance problems.  This is a major disadvantage with a physical bus topology because it is relatively easy to gain unauthorized access to the network since no active equipment sits between the intruder and other devices.  Troubleshooting performance issues on a bus topology is also a time-consuming process because each individual node must be inspected one at a time until the offending device can be identified. 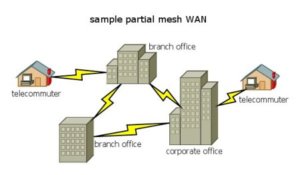 If fault tolerance is a primary objective in critical production networks, a full mesh topology ensures that each node is directly connected with every other node.  Although this model ensures continued functionality in the event of any single link failure, a full mesh topology can be expensive to implement and doesn’t scale well.  A partial mesh topology, as the name suggests, will contain many redundant links but won’t guarantee a dedicated link between each and every set of two nodes.  A mesh or partial mesh physical topology may be used to create redundancies between Ethernet switches.  A large network with many remote locations might also have a WAN with a partial mesh topology where the larger offices have redundant connections but smaller branches or telecommuters may just have one connection to a single larger branch.

Another physical topology that receives honorable mention is a wireless topology.  In a wireless topology, network devices communicate with one another via the airwaves.  In this arrangement, mobility serves as an obvious benefit but does come with its drawbacks.  Network stability can suffer due to many factors such as the distance between devices or various sources of interference.

Finally, a network doesn’t have to fit one specific topology but can be a hybrid of several models.  A corporate LAN may largely use a physical extended star topology with a few extra added redundant links where uptime is critical (partial mesh).  The same network may have wireless access points throughout the offices.  A dual ring topology may even be used by the company”s service provider for WAN services between all branch offices.  Topologies are an important part of network design, and even though you can probably create a home or small office network without understanding the various models, knowing the basic topologies can facilitate understanding other important concepts like broadcasts and media contention.