Computer networks were created the day someone got tired of walking up and down the office halls to exchange floppy disks.  This archaic method of information sharing is sometimes referred to as “sneakernet”.  Today, that same information can literally be exchanged across the world in a matter of seconds, and without having to wear out your sneakers!  This is all made possible with computer networks. 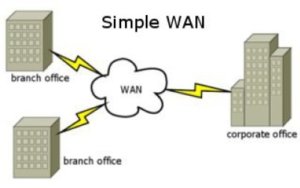 Computer networks are a collection of devices or “nodes” that are all interconnected together for the purpose of sharing resources and information.  These nodes can be PCs, servers, printers, IP phones, cameras, tablets, and even smartphones.  Computer networks can be classified by their geographic boundaries.  Local Area Networks (LANs), as the name suggests, occupies a smaller “local” geographic area such as a home or office.   On the same line of reasoning, Wide Area Networks (WANs) occupy a much larger geographic area such as a state or even multiple countries.  While it may seem at first that any network can be easily classified as either a LAN or a WAN, it doesn’t take too long to see that the lines can be blurred.  What about a network spanning multiple neighboring buildings?  Or a small town?  At what point does a growing LAN become a WAN?  Clever individuals have tried to answer these types of questions by creating more acronyms like PANs (Personal Area Networks), MANs (Metropolitan Area Networks), and GANs (Global Area Networks) but this only makes things more confusing (PANs, MANs, and GANs are terms rarely referenced in the real world anyway).  Where the boundaries are blurred, it is the technology that breaks the tie between LANs and WANs.

LANs generally have higher transfer speeds than WANs.  Typical data rates on a LAN are 10Mbps (megabits per second), 100Mbps, 1Gbps (gigabits per second, or 1000Mbps), or even 10Gbps.  This contrasts with the data rates of WANs which are usually well below 100Mbps and even more likely to fall below 10Mbps.  The shorter distances traveled in a LAN also helps eliminate the number of active devices that packets of information must flow through when moving from node to node.  This, in turn, helps reduce the number of transmission errors that are more prevalent in WANs. 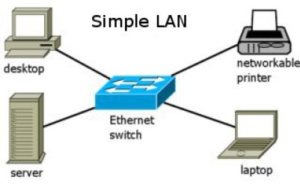 Protocols, or the set of rules for communications, also differ between LANs and WANs.  Ethernet is by far the most widely implemented protocol in today”s LAN environments.  802.11 wireless has also become more and more popular over the years as the desire for mobility increases.  Still, older protocols exist such as Token Ring which is all but extinct at this point. A brief list of protocols usually associated with WANs includes MPLS, ATM, Frame Relay, and X.25.  Broadband access also falls under the WAN and includes familiar technologies like DSL and cable Internet service.

While LANs typically fall under the administration of a single individual or organization, WANs are usually controlled by a third party service provider.  For example, if a company with two sites on opposite ends of a city decided to share its information and resources between locations (as they often do), they might decide to take advantage of a WAN by acquiring a dedicated leased line such as a T1 from the local telephone company to join the two LANs together.  Technical improvements, however, continue to blur the boundaries of LANs and WANs and that same company could upgrade their T1 (1.544Mbps) to a buried point-to-point fiber optic connection performing 1000 times faster.  Fiber optic cables allow LAN technologies such as Ethernet to be extended for many miles while at the same time increasing the transfer rates and reliability of the WAN.  This latter scenario is sometimes referred to as a “campus LAN”.  Both scenarios share a common denominator – that of a third party service provider.

Computer networks come in a variety of sizes.  They also vary in employed technologies, which in turn relate to their performance and reliability.  They can fall under a single administration or depend on multiple third parties to connect the farthest reaching devices.  From a two-computer home network to the Internet, LANs and WANs all exist for the purposes of sharing resources and information whether it be financial transactions, streaming videos or music, shopping, job hunting, or exploring the world!