It is important to realize that interoperability between devices and systems of various vendors is only possible when a previously agreed upon set of standards is used.  In the field of networking, it is useful to know a handful of these standards bodies that establish the rules of operation for protocols and systems as well as physical standards and industry best practices.

The Institute for Electrical and Electronic Engineers (IEEE) met in February of 1980 to discuss a new project for standardizing LAN technologies.  This project, known as 802 (combination of year and month) is really a large family of standards.  Within each project, multiple working groupsare created to address a particular facet of the project”s goals.  Working groups are assigned a number which is written after a decimal point which follows the project number.  Ethernet is one of the more widely known IEEE standards and was the third working group created – 802.3.  Working groups are even further subdivided into task groups to either revise or add to the general standard.  Task groups are assigned a letter following the working group.  An example would be 802.3u which defines 100Mbps Fast Ethernet with autonegotiation.

The Internet Engineering Task Force (IETF) has one mission – to make the Internet better.  Their published memorandums, known as Request for Comments (RFC) contain highly relevant technical material describing the proper behavior of protocols, or other information that defines how the Internet should work.  The well-known RFC 1918 defines IP address allocation for private networks. It is likely that your computer has some sort of buffer between itself and the Internet such as a router or firewall.  If so, your computer likely has an IP address that falls in one of the ranges listed below.

Telecommunications Industry Association (TIA) and Electronic Industries Alliance (EIA) are both organizations that have created many important standards in the industry.  The still-active TIA is actually a separate section of the EIA which has since been disbanded.  TIA/EIA-568 includes several standards rolled up into one but the most discussed feature of 568 covers the termination color codes used in twisted-pair cabling such as CAT5 or CAT6. ANSI/TIA/EIA-569-A defines the “Commercial Building Standard for Telecommunication Pathways and Spaces.”  This document goes into great detail explaining best practices for equipment rooms, entrance facilities, conduits, ceiling pathways, etc.  TIA J-STD-607-B is a standard for telecommunications grounding systems. 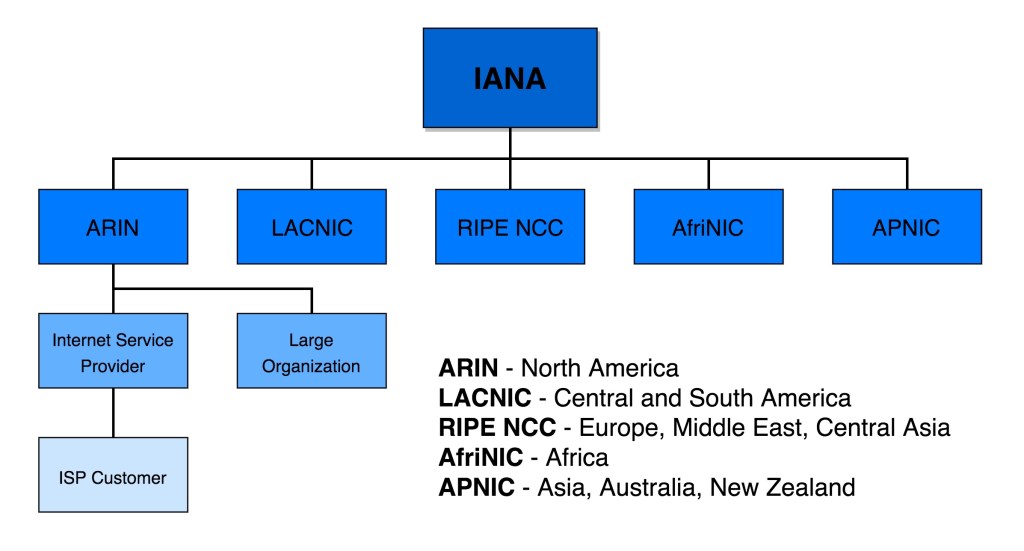 Internet Corporation for Assigned Names and Numbers (ICANN) was created in 1998 to oversee several Internet-related tasks.  ICANN, along with one of its departments, the Internet Assigned Numbers Authority (IANA) are responsible for global IP address management, top-level domain name space, and autonomous system number allocation.  From IANA, large blocks of global IP addresses are assigned to Regional Internet Registries (RIRs), each of which are responsible for a different area of the world. The American Registry for Internet Numbers (ARIN) is the RIR for North America.  RIRs then further delegate smaller blocks of addresses to Internet service providers and larger organizations.  ISPs further delegate IP addresses to commercial and residential customers.  This hierarchy ensures that all directly connected Internet hosts have a unique IP address.  This also makes it possible to target the physical location of any global IP address in use to within several miles.

International Organization for Standardization (ISO) is responsible for creating thousands of various global standards ranging from metric screw threads to hazard symbols such as the black and yellow radioactive trefoil.  For those who are just getting started in the world of networking, you will become intimately familiar with the ISO’s Open Systems Interconnection model (OSI model).  The OSI model is a 7-layer abstraction model used to describe the functions of a communications system.  It is extremely useful for understanding the relationship of different protocols and even troubleshooting connectivity issues.

Most people don’t raise too many questions, but I always find myself asking why things are done a certain way and who gets to decide.  Although this is by far not an exhaustive reference for all standards-based organizations in networking, it is a good start and what I feel to be important foundational knowledge to have.